Time and again, characters with redeeming qualities or especially different physical characteristics make them stand out the most. In Andy’s list, you will see my ranking of these characters.

For the first Andy’s list feature, we have the megane (glasses) characters! Characters with glasses always attracted me a lot. Maybe it’s because I do wear glasses myself. Good-looking guys who wear glasses are extremely attractive to me especially since people with glasses in the anime world are typically stereotyped as nerds. I like geeks and nerds. I know, I’m weird.

Without further ado, here’s my top ten favorite megane character in the world of anime. Please take note that megane characters do not only have clear eyeglasses, but I included the ones with tints in here as well.

Aburame Shino from Naruto and Naruto Shippuden is one of the most interesting characters I have ever seen in my life. Besides his mysteriously hot side, he is known for his ability to control bugs of all sorts. While I do think he’s hot enough to make this list, I think his ability to be a house for these bugs is disturbingly gross.

I don’t want to be mainstream here, but hey, Ishida is one of the hottest megane characters I have ever seen in my life. He’s extremely skilled with his weapon, and he looks a lot like Sebastian Michelis of Kuroshitsuji. What I like him is the way he plays all cool and stuff, but he’s a softie inside. Sometimes he acts like a complete idiot though.

Sadaharu Inui of Prince of Tennis 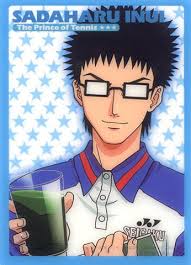 Sadaharu Inui is a stereotypical megane character with a disturbing twist. He is a geek, true, and he plays tennis through a thorough analysis of the opponent’s data. He is however, a masochist trainer though and he punishes members of the Tennis Club with a strong weird juice that will send you to your death (okay, maybe not, but it’s close). He is extremely caring of his juniors and his chibi version is just adorable.

I like the celestial spirit Loki over the Fairy Tail member Loki. For some reason, the latter just seems so plain and boring and he never attracted my attention before, but when Loki the Lion appeared for the very first time, he just seemed so.. spirit-like (so to speak). His hair is a whole lot bigger (bigger is better?) and his eyeglasses have a new shape. I often draw his chibi form on scraps of paper. It’s just so cute.

Shizu-chan as Izaya calls him, Heiwajima Shizuo is the most violent man in Ikeburo. It’s his past that makes you want to hug him so tight! From his blonde hair, to those sexy bartender outfit and the purple-tinted glasses, Shizuo is just once cool dude. His complex of wanting to kill Izaya the second he sights him and his protective older brother status makes him even cooler.

Mido Ban of Get Backers!

Mido Ban is the other half of the Get Backers team. I like him better than Ginji (although Ginji is extremely kawaii) simply because he has a feel similar to that of Shizuo. Also, his evil eyes have a power I wish to have – controlling people’s nightmares. I’d imagine using it on all the bad guys!

With over 600 episodes, the forever young award also goes to Conan. The extremely cunning detective with an eye for everything is one I also wish to be. I always wanted to have such amount of logic I could pass for a detective. And of course, Shinichi is really cute too. The only question is, how long has it been since he was a child? Is Ran already like 30 or so years old now?

Maes Hughes makes it to my top three. He is an extremely funny character with a deep obsession towards his family and devotion to his friends. You might say he’s a bit too curious which led him to his end, but I like pristine and good characters.

Yukito is one of the first megane characters I have encountered during my childhood. I have seen Card Captor Sakura about 10 times and it’s always Yukito I watch out for. He’s extremely kind and nice (like me?), likes food a lot especially sweets (like me again) and he transforms into a cool white-haired angelic creature (ummm.. okay, so not like me now). His angelic smile just brightens up any dull gloomy day.

Those long fingers.. that stare.. those eyeglassess.. that strong nose line.. I don’t know if you would see anything wrong with Kyouya. He’s obviously the most perfect character ever!

Kyouya’s hotness doesn’t just spring from his looks. He is extremely intelligent and well-organized (I like this in a guy ♥), a total controller of situations (so when things don’t go his way, he looks really insanely cute), a caring friend, sort of a sadist (yay!), extremely sly and cunning, he’s tall (hooray again! i’m super tall too), incredibly rich (owning private police, hospitals, among other corporations), and so many other perfect things! There’s no way in hell a guy like this exists in the real world.

Cool and all, Kyouya still has a cute side to him too. He says everything he does is for his benefit, but he puts his best foot forward to help someone in need.

Did your favorite character make it to this list? If not, please leave a comment on who you think should be on this list and I will try my best to fangirl over him as well. More lists to come in the future!