Otaku episodes are really hard to do! I am very sorry I am not able to update the episodes as much as I want. 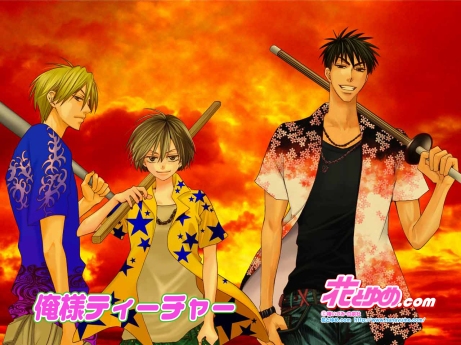 If there’s a manga I would not mind being made into anime, it is probably this one. Oresama Teacher is a really nice school life story. It talks about how one person can change for the better and how we deal with our darkness.

While this is just comedy gold, the manga has dealt with some pretty serious issues – a person’s image, a person’s past, real friendship, standing up for what is right, taking care of a family legacy, etc.

The story is focused on Kurosaki Mafuyu, a delinquent leader who gets expelled from her school. She transfers to a school far away from her hometown and decides to be a girly-girl on the first day of school to get rid of her old image, but fails. She meets Saeki Takaomi, a school teacher who was her childhood friend, and is probably the reason why she became a delinquent.

Takaomi forms a disciplinary club in hope of doubling the school population, a bet he made with the chairman to get the school property (which is actually his grandfather’s) back. Mafuyu is dragged into the club, as well as her new friend and classmate, Hayasaka.

The student council, headed by the grandson of the school chairman, plots to do everything in their power to stop the club. The story revolves around how the student council members take turns in getting the club to disband.

I love the drawing and the story of the manga! I highly recommend this to everyone!

Among all my Jdrama collection, I have probably seen Fugoh Keiji the most. It has two seasons, but I like Season 1 the most.

The drama is one of the reasons why I am such a big Fukada Kyoko fan. She is just too cute!

The drama is about Kanbe Miwako, a billionaire police officer who uses her grandfather’s riches to solve crimes.

If you guys know me, I like crime stories the most! (See Episode 5 and 6 for Kurosagi – a great crime series too!)

I highly recommend this drama to anyone who wants to see a crime story solved so cutely! MOE~

This is a recently completed anime – about last month I think [?]. I enjoyed the anime so much I finished it in a day.

The story is about Yokodera Yoto, a high school boy who is unable to speak out his perverted thoughts. He heard of a rumor that a Stony Cat statue in a the hill of the town will take something you do not need and grant a wish. The night he went to make a wish, he meets Tsutsukakushi Tsukiko, a girl whose wish is for her emotions to not show easily. They get their wishes, but after a day, they are not happy about it and want to take it back. The rule for the wish is what they don’t need the statue would give to someone else so they must now find the person who got the qualities they lost.

I highly recommend this anime to shoujo fans. It is funny as hell. The ending was surprising too.

I had this single sitting in my laptop for months! How could I ignore Kana Nishino! My favorite is track two, Talk to Me, but I couldn’t find it anywhere. Here’s a live version of the main track, Go for It!

This was released in Summer 2012, but it is still a pretty cool summer song. I have been listening to the three tracks in the single for two days now and I have not gone tired of it yet. I highly recommend this to everyone!

That’s it for this episode. Hope you guys like it!

P.S. I planned the episodes so I have until Episode 16 written and ready for publishing. I will be publishing once a week. Until then, ciao!~

Posted in Anything Asian, Project 52