Plot Summary: In Hope’s Peak Academy, 15 students who are considered “super” in their own ways are admitted. Monokuma, an electronic bear, appears in the gym offering a way out of the tightly-secured school. However, the rules are to kill and find out who the killer is or stay in the academy forever. 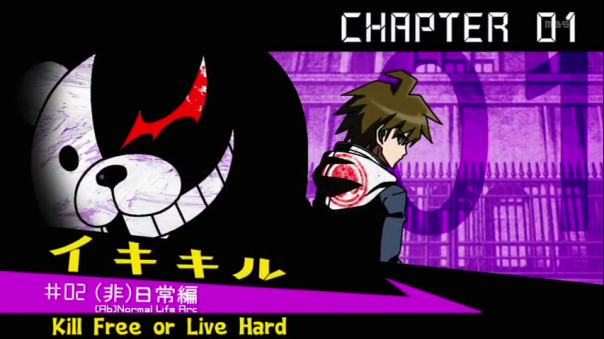 Monokuma explains the rules of the rooms to Makoto. Makoto’s bathroom door has a bad door handle that only opens when you lift it properly.

Sayaka exchanges rooms with Makoto, explaining that it would help calm her down. The next morning, she is found dead in Makoto’s bathroom with a kitchen knife in her abdomen. 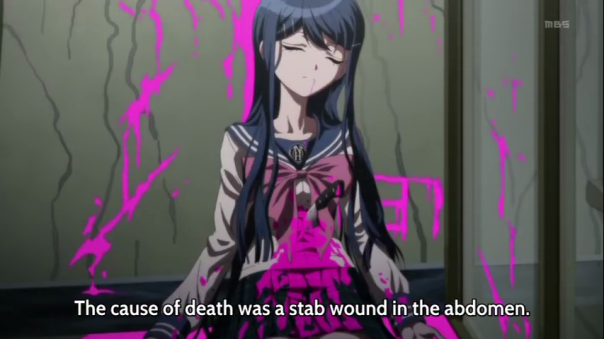 The Monokuma gathers the students to gym, explaining that a class trial will be held after a few hours. In the class trial, if the culprit is found, he/she will die. If the class convicts the wrong person, everybody else but the culprit dies. Enoshima Junko protests and is killed by Monokuma with spears.

They look for pieces of clues. Makoto watches Sayaka’s motivation DVD with all her idol members being murdered.

Thoughts: Holy mother of God! I did not expect Sayaka to die! That model Enoshima too! I am starting to like this anime more and more.

That Monokuma is starting to look like the stuffed animals in Kampfer.

Plot Summary: In Hope’s Peak Academy, 15 students who are considered “super” in their own ways are admitted. Monokuma, an electronic bear appears in the gym offering a way out of the tightly-secured school. However, the rules are to kill and find out who the killer is or stay in the academy forever. 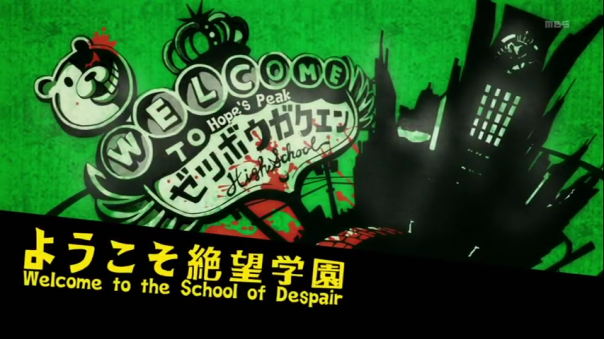 The main protagonist, Naegi Makoto wakes up and finds himself in a classroom secured with metal bolts. He goes to the gym and finds 14 other students, one of whom he attended middle school with, Maizono Sayaka. The 15 “super” students meet Monokuma, a highly sadistic remote-powered stuffed bear stating the rules of the school.

The only way to “graduate” from the school is to kill someone and not be discovered. For a few days, everyone decides to wander and look for an exit. When the Monokuma got bored, he motivates everyone by allowing them to watch a DVD with something horrible happening. In Makoto’s case, it is his family dying.

Thoughts: I noticed similarities to many anime series and drama series I have seen before. For one, the theme of this anime is kill or be killed, which is similar to Battle Royale. In BR however, they are forced to kill within a time frame. In this anime however, they are given the chance to participate by killing or by finding out who the murderer is. You can also see similarities to Liar Game, except you are not being conned with money. In Liar Game, you have to outwit your enemy by deceiving them and I think that is what is about to happen to this anime.

Similar anime where you are trapped also include Sword Art Online and Btooom. I am guessing Sayaka is not as weak as she appears to be. I think she might be a serious competitor for Naegi in the end.